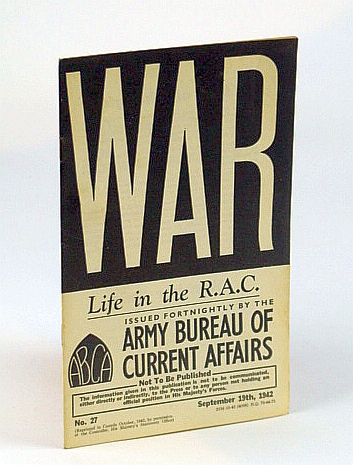 12 pages. "Not to be Published - the information given in this publication is not to be communicated, either directly, to the Press or to any person not holding an official position in His Majesty's Forces." - from front cover. Reprinted in Canada October, 1942. Contents: Life in the R.A.C. - tank crews in training; The Tanks at Dieppe - actual dialogue of R.T. wireless conversation between members of the tank crews of B and C Squadrons of the 14th Canadian Army Tank Regiment (The Calgarys); Finding New Officers; Index for numbers 1-26 of this publication. Light wear. Clean and unma...
View More...