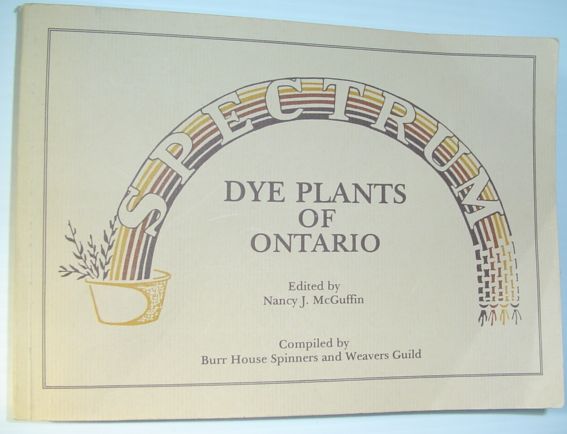 0969252005 309 pages including index and bibliography. Presented by the dyers of Ontario to those who share their appreciation of the plant world and join in their commitment to its conservation. Compiled from classic and contemporary books on plant dyeing, it is a pictorial catalogue of more than three hundred dye plants which grow or can be cultivated in the province or in regions with similar climates. The first section explains the dye project and its structures, together with material on plant gathering, plant identification and the plants themselves. The second section presents usefu...
View More... 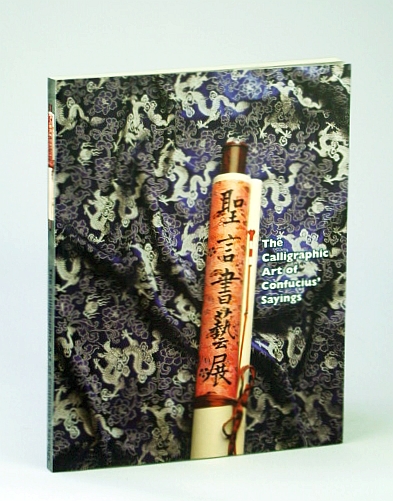 The Calligraphic Art of Confucius' Sayings. Exhibition Catalogue (In Chinese and English) 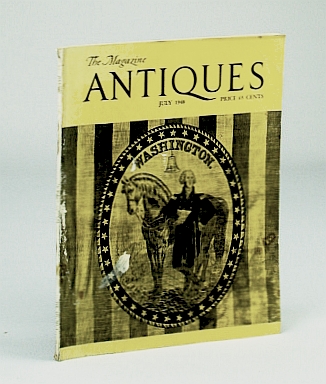 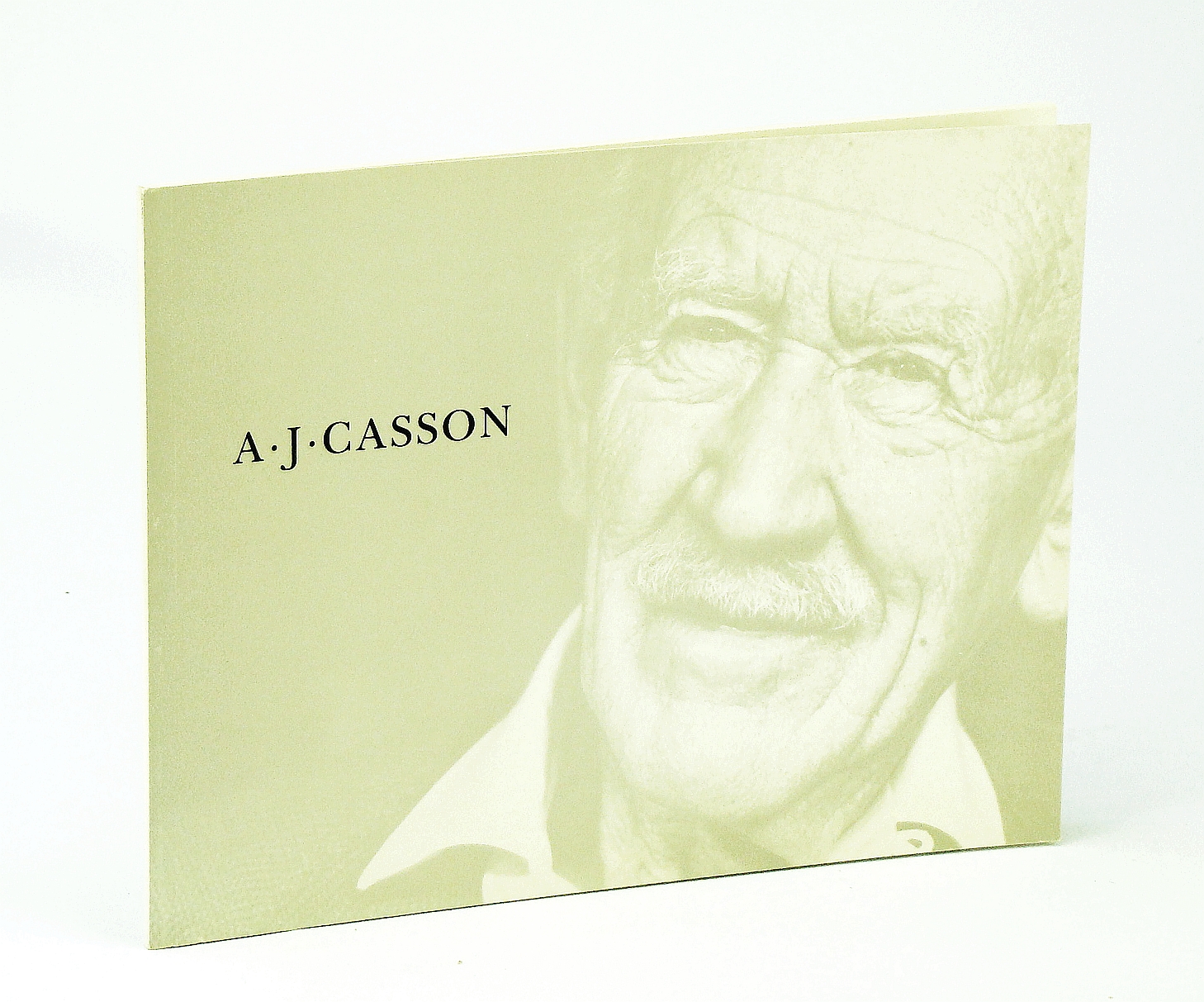 A. J. Casson. An Exhibition Organized By the Art Gallery of Windor to Mark A. J. Casson's 80th Birthday

B001BCPBYG Catalogue of this exhibition which took place at the Art Gallery of Windsor May 14 - July 9, 1978 and the Art Gallery of Ontario July 22 - August 27, 1978. Includes colour and black and white reproductions of a selection of Casson's magnificent works. 44 pages. Oblong 8.5 x 11 inches. Includes lists of exhibitions. Clean, bright and unmarked with light wear. Printed upon glossy stock. A quality copy.
View More... 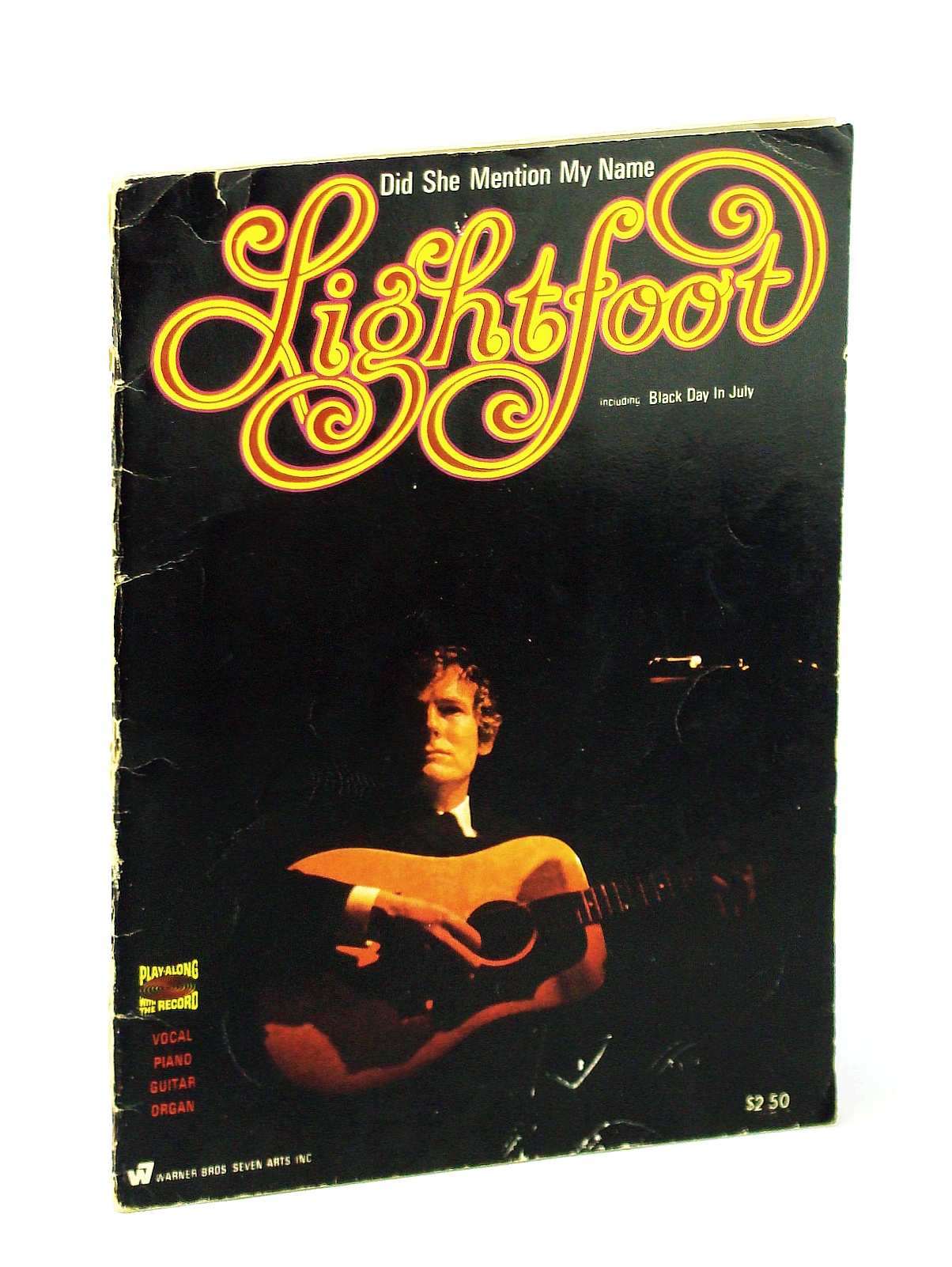 Gordon Lightfoot : Did She Mention My Name [Songbook]

B0013GDNV8 40 pages. Black and white photo centerfold feature. Songs as recorded on United Artists Album UAS 6649. Includes sheet music for piano and voice with guitar chords for these songs: Black Day in July; Boss Man; Did She Mention My Name; Does Your Mother Know; I Want To Hear It From You; Last Time I Saw Her; Magnificent Outpouring; May I; Mountains and Marian; Pussywillows, Cat-Tails; Something Very Special; Wherefore and Why. Unmarked with above-average wear. Binding intact. A worthy vintage copy of this classic compilation.
View More...

0889751188 269 pages. Privatization is the buzzword of the times. Every day we hear more about the plans of government to sell off assets and privatize services ranging from garbage collection to uranium processing. This topical and timely book contains speeches and discussion which took place during a two-day symposium and is a valuable resource tool for anyone interested and concerned about privatization. Very light wear. Clean and unmarked. Glossy illustrated covers. Excellent copy.
View More... 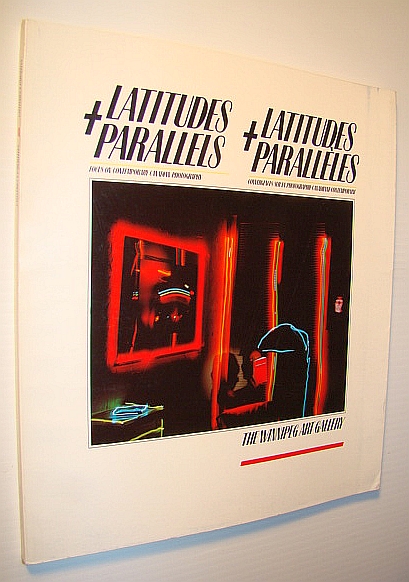 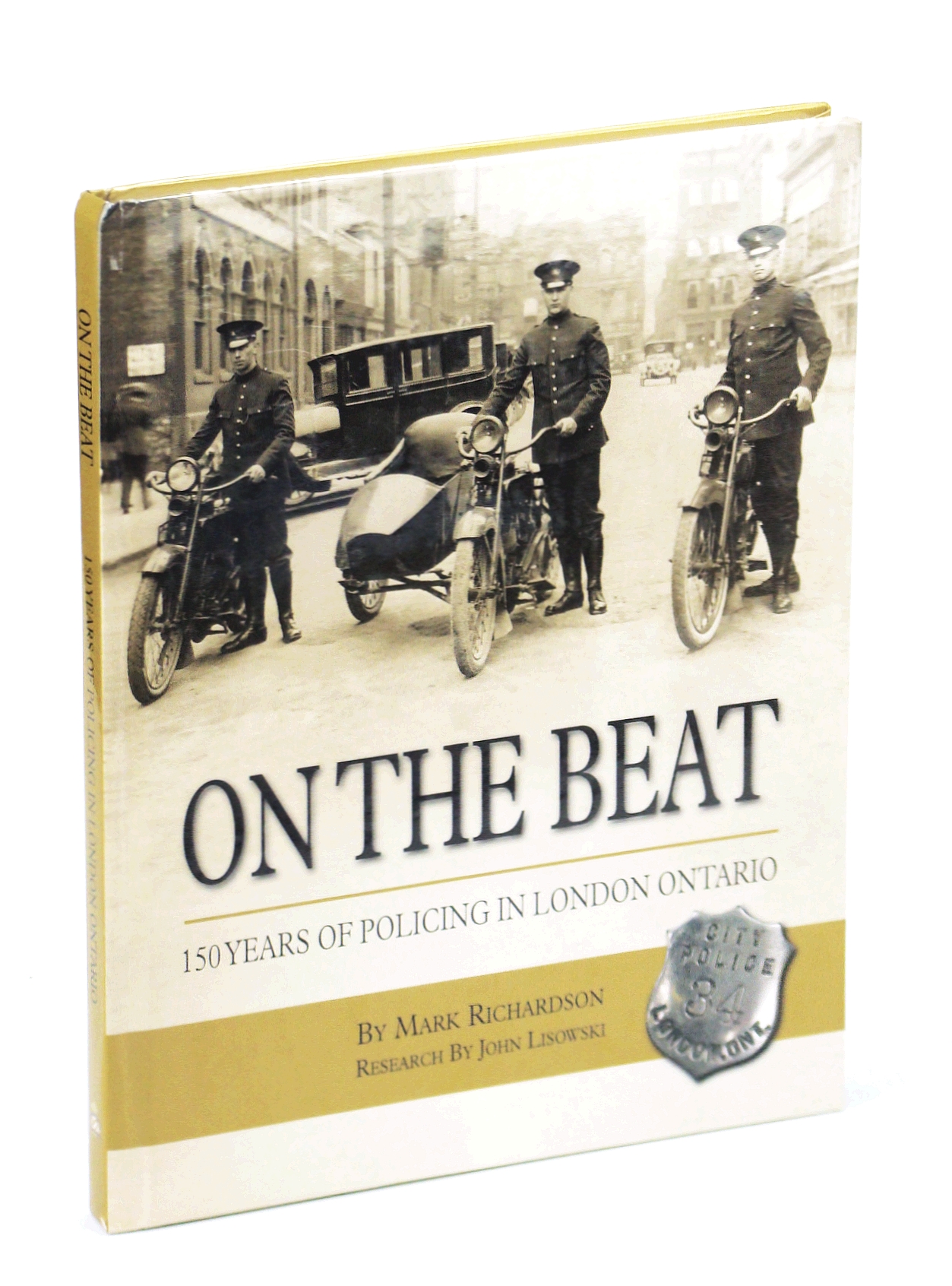 On the Beat: 150 Years of Policing in London, Ontario

1897215010 182 pages. Footnotes. Index. Generously illustrated with black and white reproductions of photos, plus several in colour. Published to accompany the exhibition, On The Beat: 150 Years of Policing in London, Ontario, July 30, 2005 to January 15, 2006. Gift greetings upon front free endpaper otherwise clean and unmarked with very light wear - the only exceptions being several short openings along fore-edge of back board. A nice copy of this informative history.
View More... 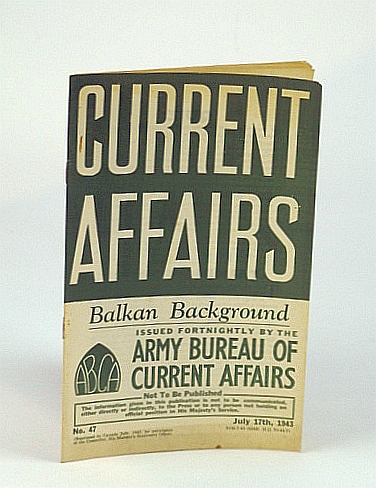 16 pages. "Not to be Published - the information given in this publication is not to be communicated, either directly, to the Press or to any person not holding an official position in His Majesty's Forces." - from front cover. Reprinted in Canada, July, 1943. Contents: Talking points; Peoples of the peninsula; Land and plan; Centrefold map; The Eastern Question; The Question reopened; Nazi catspaws and victims; "Victors in Chains" - sabotage, ambush, train-wrecking. Clean and unmarked with light wear. A quality copy.
View More... 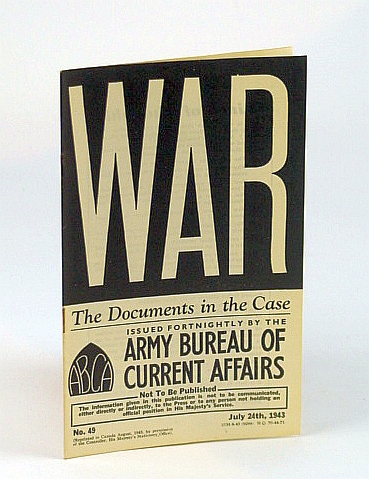 12 pages. "Not to be Published - the information given in this publication is not to be communicated, either directly, to the Press or to any person not holding an official position in His Majesty's Forces." - from front cover. Reprinted in Canada June, 1943. Contents: The Job of the Records Office; Thee Four Divisions of the Record Office; The Horse's Mouth (cont'd) - the second of two articles compiled by questioning a number of officers and men evaculated as casualties from North Africa about how their training could have been better. Back page advice for how to avoid harming agr...
View More... 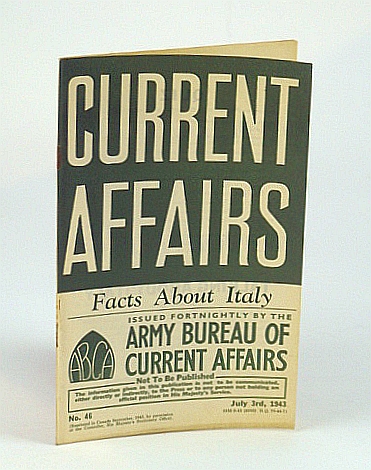 16 pages. "Not to be Published - the information given in this publication is not to be communicated, either directly, to the Press or to any person not holding an official position in His Majesty's Forces." - from front cover. Reprinted in Canada, September, 1943. Contents: Talking points about Italy; Facts about Italy; Centrefold map of Italy; Rise of fascism; Fascist State; Results of Fascism in Italy. Clean and unmarked with light wear. A quality copy.
View More... 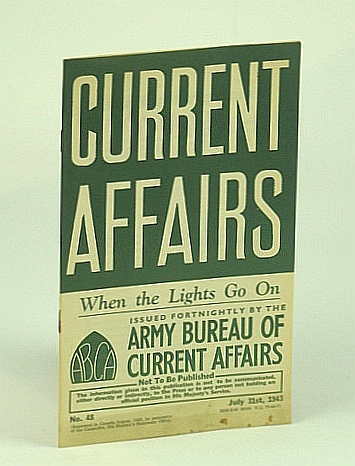 16 pages. "Not to be Published - the information given in this publication is not to be communicated, either directly, to the Press or to any person not holding an official position in His Majesty's Forces." - from front cover. Reprinted in Canada, August, 1943. Contents: Discussing post-war Problems - a warning and some tips; When the Lights Go On. Unmarked with moderate wear. A sound copy.
View More... 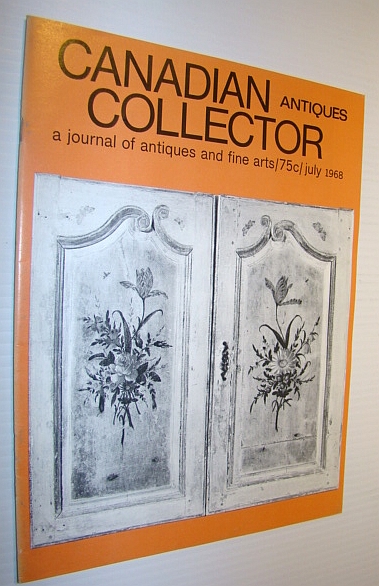 31 pages Features: Parian Statuettes - Brief history of Parian Statuettes of the 19th Century and the Canadian makers; Maisons du Quebec - Quebec architecture of the late 18th Century; The Burlington Glass Site Part - Burlington Glass Co. in Hamilton, Ontario (circa 1874 - 1910) and articles unearthed at the old site 1967; Scottish Silverware - History of Scottish silverware between the sixteenth and eighteenth centuries; Unusual Exhibits in a Handmade Country - A look at a few of the 400 museums and art galleries in the Netherlands; Dried Bouquets for you Antiques - The art of drying f...
View More... 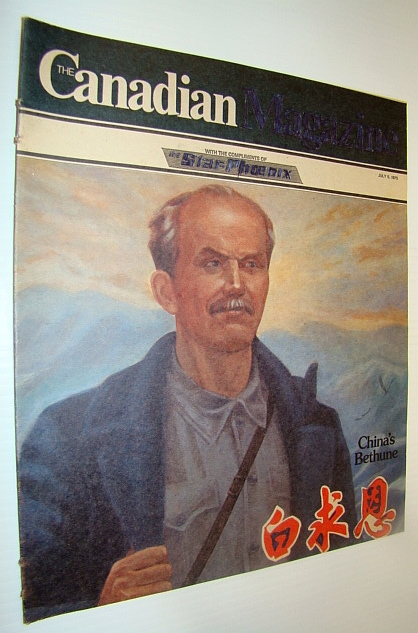 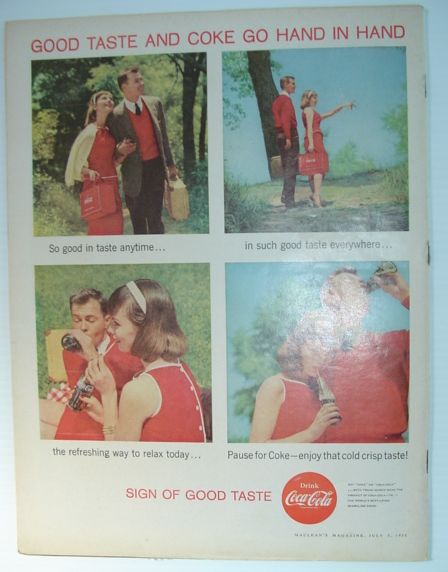 Front cover missing. Centrefold loose but present. Articles include: The Pipeline Uproar; Holiday week end in Vancouver; The Biggest Country Club in Canada; The Man Who Stayed Invisible for 13 Years; How to Get the Most out of Summer; Johny Longden Tells His Own Story - Part IV; Why I Hate Doctors by Hugh Garner. Average wear. Unmarked. Nice full-page colour ads for BA Gas, Coke, Caterpillar, Kodak, Labatt's Pilsener, Confederation Life. Average wear. (Please inquire about a copy complete with front cover which may be available for a higher price)
View More... 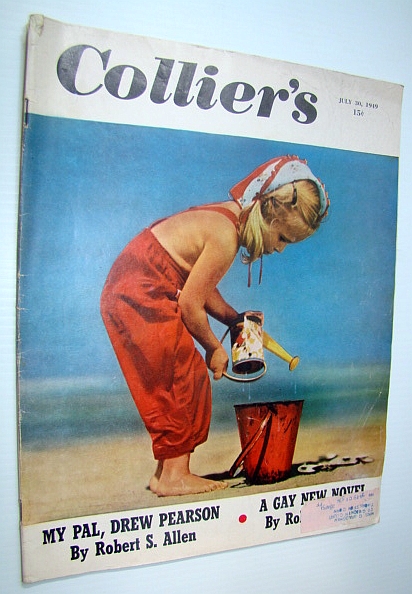 74 pages. Articles: My Pal, Drew Pearson; Richest Man in the Cemetery - warning to wives who don't want to be widows; It Happened in Mississippi - Thousands of sharecroppers in the 13 fertile delta counties are buying and equipping their own farms with aid from the Farmers Home Administration; Voyage of the Pagan - John Caldwell's Sailing Adventure (part 2 of 3); I Cover the Animals - nature writer John (Tex) O'Reilly; The Surprising Phillip Jessup - the man who helped lift the Berlin blockade; It's in the Cards - Jack Jarvis of Seattle prints funny membership cards; Marvelous Mel Parnell; - P...
View More...

Pathways to the Old Northwest: An Observance of the Bicentennial of the Northwest Ordinance 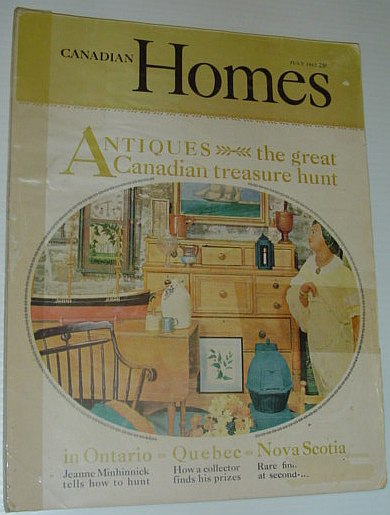 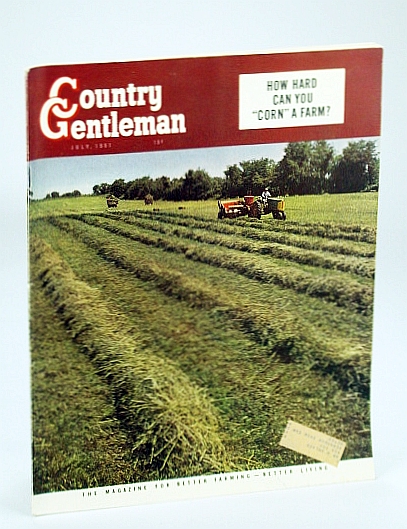 Country Gentleman Magazine - The Magazine for Better Farming, Better Living, July 1951 - How Hard Can You Corn a Farm?