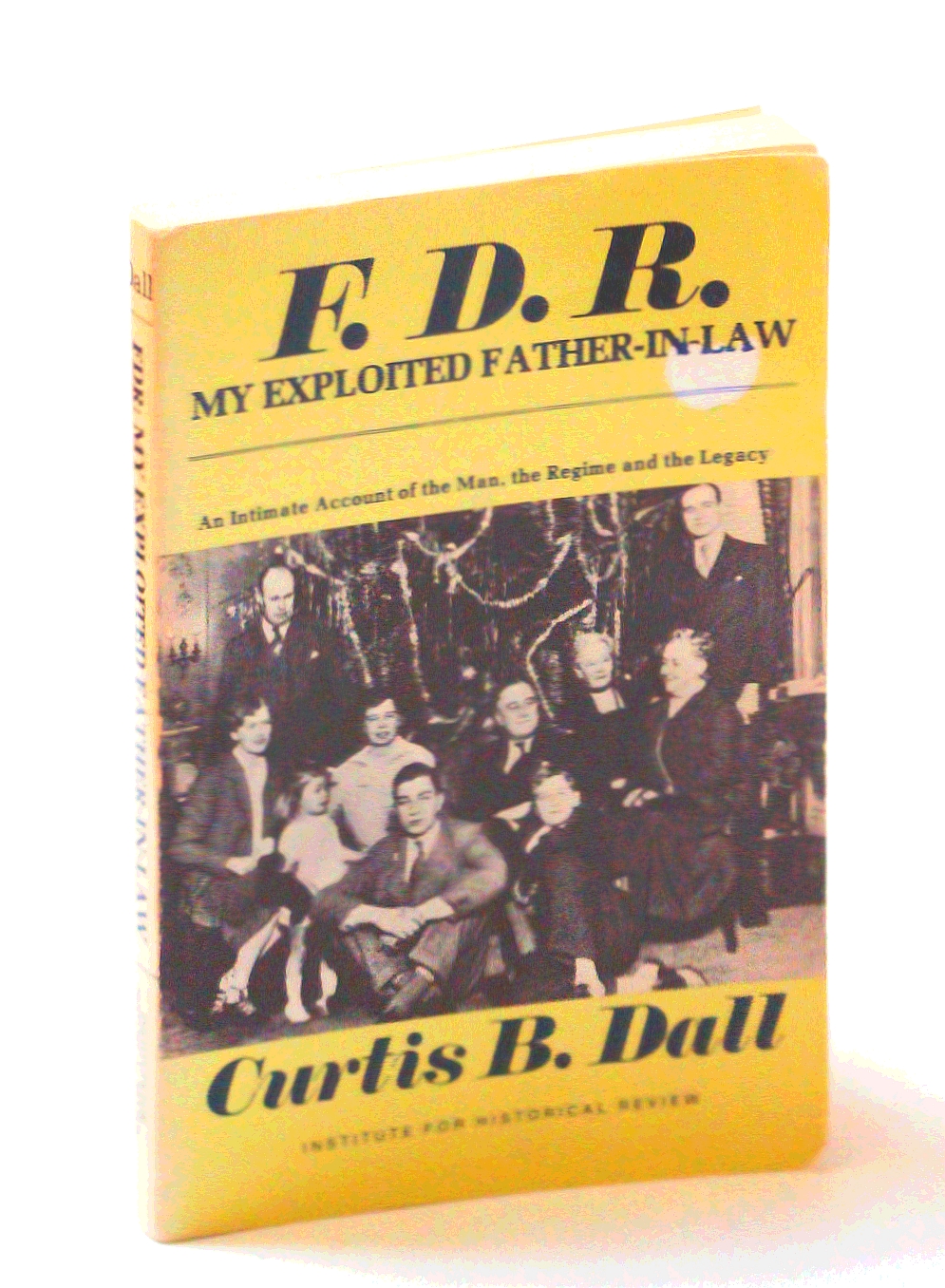 F. D. R. My Exploited Father-In-Law: An Intimate Account of the Man, the Regime and the Legacy

Edition: Reprint of the Revised Edition

Includes fascinating six-page photo-illustrated feature by William P. Hitler, Adolph's nephew "who tells so candidly some things about his uncle that only a relative could know". Other features include: Student Nurses - their work and their uniforms; Stockings - short skirts bring new styles - Willy De Mond (Willy's of Hollywood); Why I Want Roosevelt to Run Again, by Harold L. Ickes; Gatti Pictures - an African Chief takes his 70 wives to the Beauty Parlor; Page of America's 10 most wanted, with photos, by J. Edgar Hoover; Movie Preview - Lady of the Tropics, starring Hedy Lamarr, and Robert...
View More... 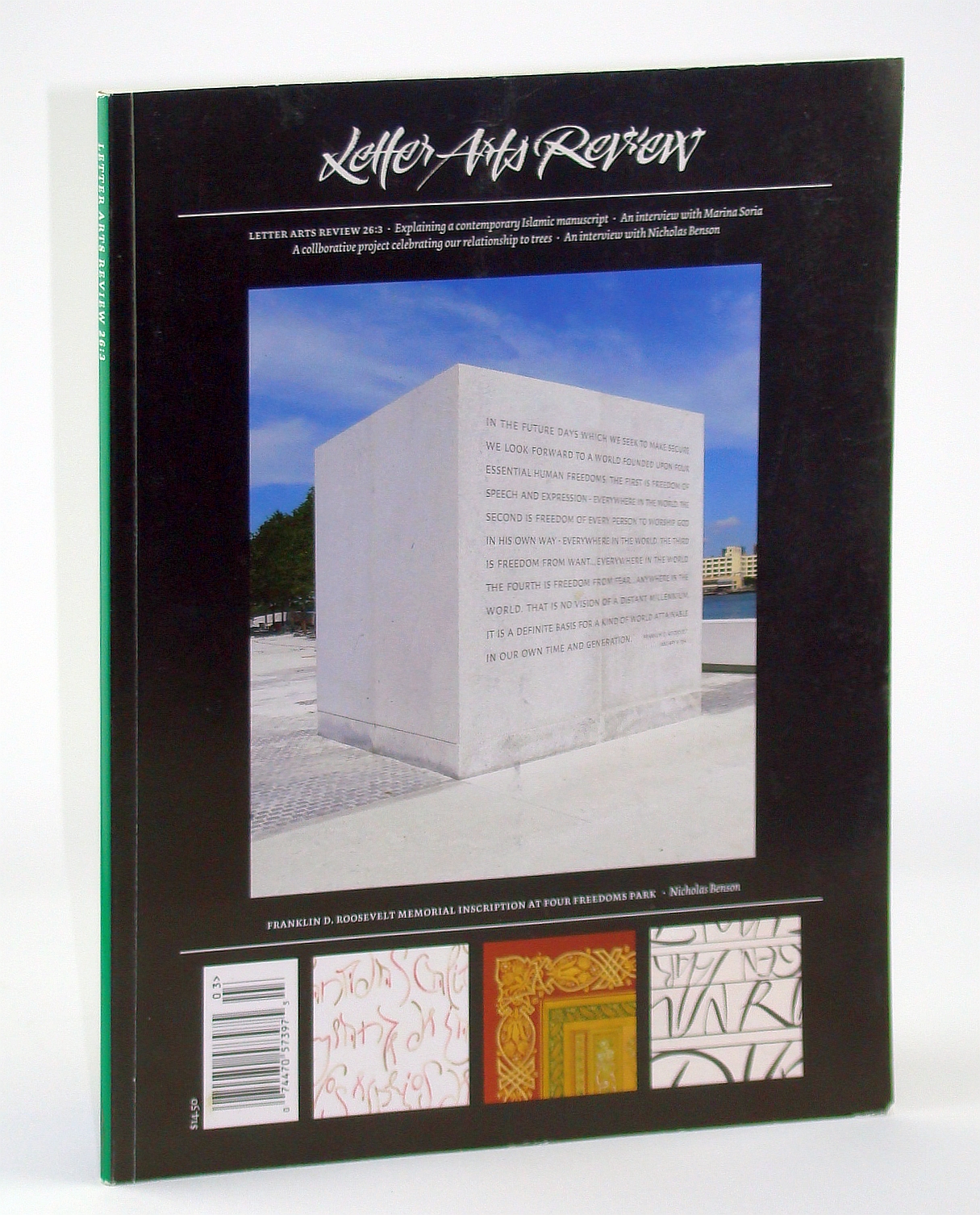 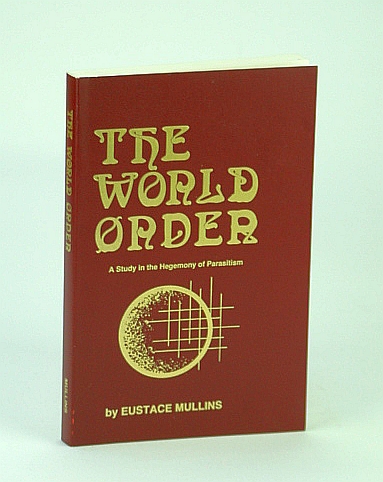 The World Order - A Study in the Hegemony of Parasitism

Signed by author on dedication page. 217 pages. "...The World Order, in its anxiety to maintain control of every aspect of our lives, has banned passion. As a poor substitute, it gives us drugs and degeneracy. There are many facts in this book which you, the reader, will not wish to accept. I ask you to accept nothing, but to make your own investigations. You may find even more astonishing true facts than I have managed to glean in thirty-five years of intensive and in-depth research." - from Foreword. Chapter titles include: The Rothschilds; Soviet Russia; Franklin Delano Roose...
View More... 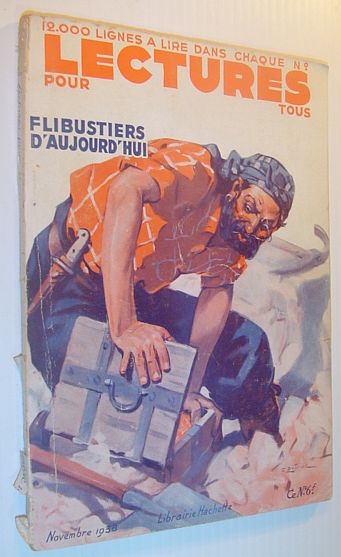 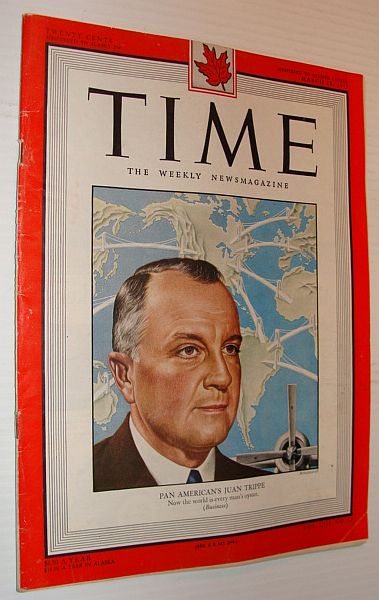 68 pages. Features and Articles: Nice colour photo Studebaker ad inside front cover; Journalist Robert Low returns from reporting the news for three years on each side of the Balkans' lowering iron curtain; The North Atlantic Treaty is announced; Shostakovich applies to visit the U.S.; Allen Ellender's filibuster record in Louisiana; Federal Judge Medina and his trial of eleven communists charged with conspiring to overthrow the government; Franklin Delano Roosevelt Jr. announces for the seat of the 20th district on Manhattan's West Side; Dave Beck of the A.F.L. Teamsters; Boston's Anna Sulli...
View More... 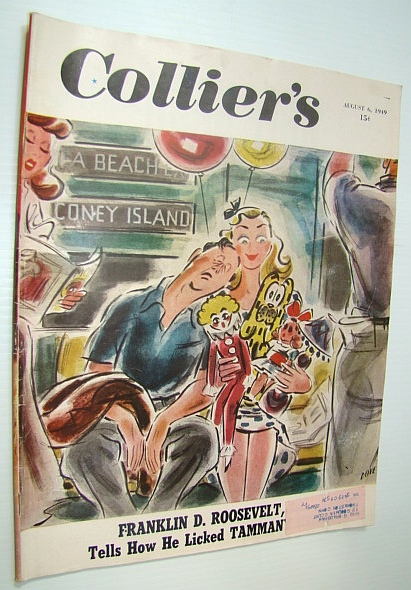 74 pages. Articles: How We Won - F.D.R. Jr.'s own story of his first political victory; Cool Reading for August; The Biggest Blast of the All (part 1 of 2) - The Untold Secrets Behind the bombing of Hiroshima - with photo of Col. Paul W. Tibbets, Jr.; Hoyt of the Hambletonian - harness racing story with color photos; There They Were! Jet Hop to Europe - the first transatlantic jet ferrying mission; Charmer for a Nice Fee - Charlie Feldman and his Famous Artists Agency - article with nice color photo; Voyage of the Pagan - John Caldwell's Sailing Struggle to Australia (conclusion); Attractive N...
View More... 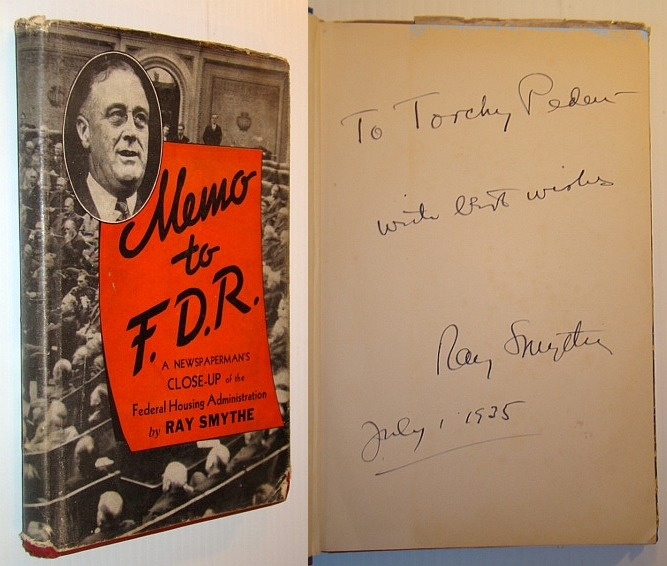 188 pages. "To Torchy Peden with Best Wishes, Ray Smythe, July 1 1935" written boldly upon front free endpaper. A newspaperman's close-up of the Federal Housing Administration (FHA) - subtitle. "Offers the first constructive close-up of the people who are administering the National Housing Act, and the banking, industrial and employment problems with which this group is dealing so effectively." - from dust jacket. Binding intact. Somewhat above-average wear.
View More... 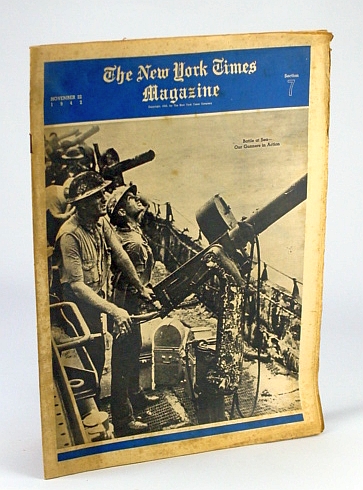 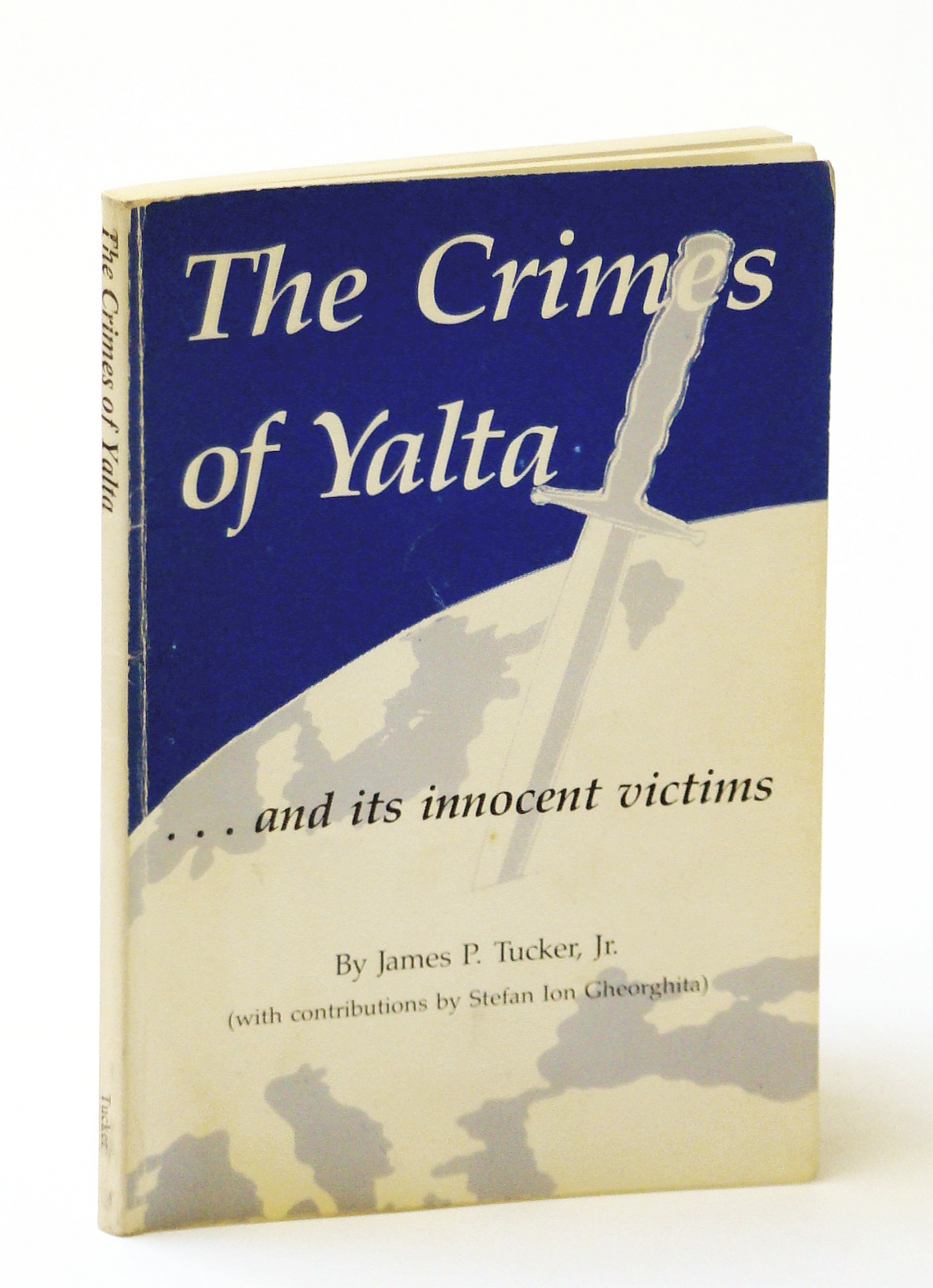 The Crimes of Yalta...and Its Innocent Victims

B0029ZP5I6 113 pages. Bibliography. Unmarked. "The mistakes at the Yalta Conference, which permitted the Soviet Union to drop an Iron Curtain over Eastern Europe, have often been attributed to the ill health of President Roosevelt. But new information, leaking out over four decades, points conclusively to the fact that there were no 'mistakes.'" - Foreword. In later years Tucker (1934-2013) rose to fame as he tracked the surreptitious activities of the Bilderberg Group. Binding intact. Somewhat above-average wear. A sound reading copy.
View More... 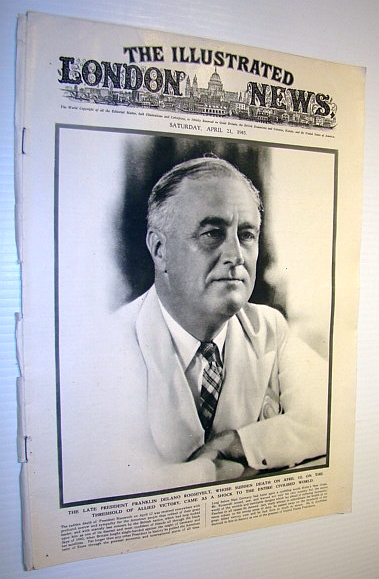 Cover: The Late U.S. President Franklin Delano Roosevelt Whose Sudden Death on April 12, Came as a Shock to the Entire Civilized World. Features include: Our Notebook; Book Review: "Our Heritage of Widl Nature" by A.G. Tansley; and The Great World War: Nearing the End in Germany (inc map). Pictorial Journals include: Great President: Scenes From the Life of Mr. Roosevelt; Pictures From America, Germany and Italy; The Allied Advance in Western Germany; British Storm Arnhem - Avenging Men of the First Airborne Division; The Invasion of Germany: Incidents in the Allied Advance; ...
View More... 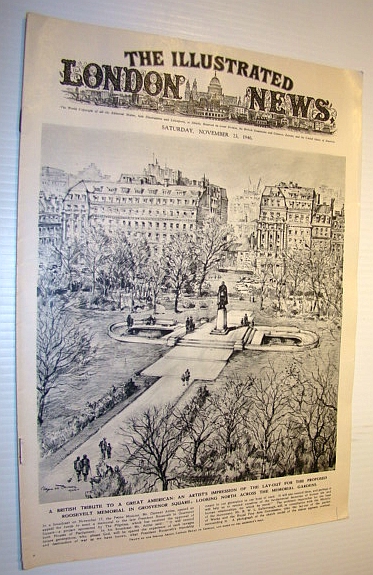 Cover: A British Tribute to a Great American: An Artist's Impression of the Layout for the Proposed (Franklin Delano) Roosevelt Memorial in Grosvenor Square. Features include: Our Notebook; The World of Science: Meteorites and Meteors; A Cast Iron Ring 2500 Years Old: Further Discoveries in the Byci Skala Cave; 100,000 Years of Central European History: Recent Moravian Discoveries Related to the Story of Man; Book Review: "Four Studies in Loyalty": by Christopher Sykes; Notes for the Novel-Reader; and Books of the Day. Pictorial Journals include: The King Opens Parliament in S...
View More...